The ecological associations between dwarf mistletoes and insects have attracted interest and involve at least three types of relationships: insects as pollinators, herbivores. and pathogens of host trees predisposed because of mistletoe parasitism (Stevens and Hawksworth 1970). The insects associated with and/or pollinating Arceuthobium are numerous, as was shown in the study by Penfield et al. (1976) where greater than 200 species were found with three Rocky Mountain dwarf mistletoes. This paper will focus upon the relationships between ants and mistletoes, with particular attention given to Arceuthobium. Additionally, observations on leaf-cutting ants removing Arceuthobium stem material in Sinaloa, Mexico is reported.

Bees are conspicuous pollinators of Arceuthobium, however other hymenopterans such as ants (family Formicidae) have also been observed on dwarf mistletoe inflorescences (especially staminate ones) and are now known to serve as pollinators. Dowding (1931), Stevens and Hawksworth (1970), Penfield et al (1976), and Gilbert and Punter (1984) all record observations of ants upon A. americanum. The latter study, conducted in Manitoba, lists five ant species for this dwarf mistletoe: Camptonotus herculeanus (Linne), Dolichoderus taschenberi (Mayr), Formica sp. fusca and rufa groups, Lasius sitkaensis (Pergande), and Tapinoma sessile (Say). Additional ant species collected from this mistletoe in Colorado include Formica sanguinea subnuda Emery and Lasius niger neoniger Emery (Gregor et al. 1974). The staminate flower of Arceuthobium is composed of three to six perianth parts (sepals), sessile anther sacs, and one central nectary. Carpellate flowers exude a nectar droplet that is 58 to 92% total solids (sugars) (Brewer et al. 1974). It is likely that ants visit dwarf mistletoe flowers to feed upon the secreted nectar and by chance move pollen (adhering to body hairs) from flower to flower.

A large number of insects are known to feed upon dwarf mistletoes (see list in Stevens and Hawksworth 1970) and include Hemiptera, Orthoptera, Lepidoptera, and Coleoptera. Few reports, however, list ants or other hymenopterans as consumers of dwarf mistletoe tissue. Hawksworth (1961) observed ants removing Arceuthobium vaginatum seeds from petri dishes during field studies in the southwestern U.S. Seeds were later offered as food to three species of ants (in captivity), however they were not eaten. The conclusion was that either captive ant behavior differs from that displayed under natural conditions or that mistletoe tissue is not a significant food source for those ant species. The western harvester ant (Pogonomyrex occidentalis) builds large mounds using the surrounding vegetation. Hawksworth (pers. comm.) has seen dwarf mistletoe tissue taken into the mound, however it is not clear whether the material was from living plants or simply collected off the ground.

Strictly speaking, a myrmecophyte is a plant with a series of morphological adaptations which predispose it and an ant species toward a mutualistic relationship. The most noted examples of these include such rubiaceous epiphytes as Hydnophytum and Myrmecodia that form complex, bulbous chambers which harbor ant colonies. Apparently such plants derive a selective advantage by being protected from herbivores and twining plants. In a review of symbioses between ants and epiphytes, Huxley (1980) lists seven families of plants, including ferns, monocots, and dicots, which have members regularly associated with ants. Unfortunately, no reference to parasitic epiphytes, such as mistletoes. is made. Such an association was described Wheeler (1942) where the stems of Phoradendron flavescens var. villosum (P. villosum) in Arizona are regularly inhabited by Crematogaster arizonensis. The chambers are actually excavated by a curculionid beetle and several other insects share this "interesting biocenose". It is probable that this mistletoe has not undergone the evolutionary adaptations to ant habitation that other species have, such as the production of foliar nectaries, food bodies, or "myrmecodomatia".

The Attini group of harvester ants have adapted to numerous habitats and some are considered serious economic pests in agricultural areas (Wilson 1971, p. 41). The foraging behaviour of Atta mexicana Smith, known as "hormiga arriera" in Mexico, was described by Mintzer (1979). This ant is common and widespread in Mexico ranging from Texas in the north to Guerrero in the south (Smith 1963) and forms some of the largest colonies of any North American ant. The following plant species were selected by these ants: Larrea tridentata (Zygophyllaceae), Olneya tesota (Fabaceae), Cercidium microphyllum, C. floridum (Caesalpiniaceae), and Sapium biloculare (Euphorbiaceae). Several plant species common to the study site were selectively avoided, such as Franseria dumosa. A species of Phoradendron (possibly, P. californicum, the parasite of Prosopis) was listed as being infrequently attracted by the ants.

While studying the Mexican mistletoe flora during August of 1985, I was able to observe a colony of Atta mexicana at a site in southern Sinaloa [along highway 40, ca. 4.5 km southwest of Loberas, 2500 m elevation]. The ants were actively harvesting living shoots of a dwarf mistletoe, tentatively identified as Arceuthobium vaginatum ssp. durangense, which was parasitizing Pinus montezumae. Belying its name, shoots of this dwarf mistletoe may, exceed 30 cm in length and 8 mm in diameter. The ants were removing plant material, usually beginning at the most distal segments. by severing the stem with the mandibles (Figure 1). As observed by Mintzer (1979), the ants usually stand on the stem they are removing. Stems 4 mm in diameter were cut from the plant by one worker and others would often cooperate in carrying the cut piece down from the tree. Ants and the plant material they were carrying were collected, preserved in ethanol, and later weighed. The largest dwarf mistletoe shoot weighed 0.4 g, i.e. approximately four times the weight of the largest ant collected (a submajor or major). Atta mexicana displays marked caste polymorphism; worker body lengths ranged from 0.65. to 1.1 cm and, most strikingly, the heads measured from 2 to 4.3 mm in width. Most of the foraging ants were medias as shown in Figure 1. Once on the forest floor, the ants joined a procession of hundreds of others and followed a trail to the entrance of the subterranean nest ca. 30 m away.

The majority of plants collected by the ants at this site were dwarf mistletoe shoots. Some ants were carrying pieces of bracken fem (Pteridium) and leaves of several unidentified dicots. At a site further south along Highway 40, another colony of Atta mexicana was seen carrying corollas that had fallen to the ground from a species of Psittacanthus. Since these ants only utilize certain species of plants as vegetable manure to culture fungi, it remains to be determined what chemical features these plants impart upon the cultures.

One avenue that may merit attention is that plants chosen by leaf-cutting ants are rich sources of lipids or lipid-like compounds. Members of the genus Sapium are known as vegetable-tallow trees and the fatty covering of the seeds of S. sebiferum is used for candles and soap. The seeds also yield an oil. Mistletoes such as Arceuthobium have been examined for lipids (Chen et al. 1977) and palmitic, oleic, linoleic, and arachidic acids are the major components. For the five dwarf mistletoe species examined, lipids comprised 3.5 to 8.5% of the dry weight. The presence of high lipid concentrations (as lipid droplets) has been shown in ultrastructural studies of dwarf mistletoe external and endophytic tissues (Alosi and Calvin 1984). Additionally. a distinct lipid layer will separate from other cellular debris following centrifugation of Arceuthobium tissue homogenates being prepared for protein electrophoresis (Nickrent, unpub.). The sterol and fatty acid composition of Phoradendron was examined by Orcut and Calvin (1978), however the percent lipid per dry weight was not reported. A trend toward storage of lipids appears to be taking place in these obligate parasites. This adaptation is energetically, more efficient since lipids contain more energy per unit weight than carbohydrates such as starch.

Mintzer (1979) points out that few herbivores utilize Larrea as a food source. In a detailed account of the chemistry of creosote bush, Mabry et al. (1977) indicate that creosote is high (10-15% of the dry weight) in saponins and that the leaves are covered with a resin which contains nordihydroquaiaretic acid (NDGA). NDGA has strong antioxidant activity for oils and has been used as such commercially. If the ants are collecting lipid-rich plants, the addition of NDGA containing leaf material could act as a preservative for the other vegetation cached in the fungus garden chamber. 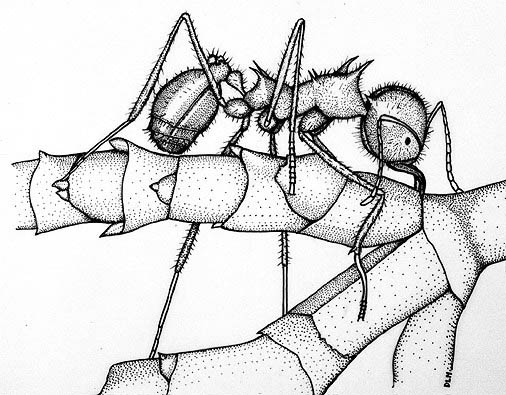